OCCIDENTAL LEATHER ®, SPECIALIZING IN PROFESSIONAL CARPENTERS TOOL BELTS AND POUCHES, WAS ESTABLISHED BY DARRYL THURNER IN THE VILLAGE OF OCCIDENTAL, CA. IN 1979.

The "hand-specific", intuitive, tool holder placement evolved with every prototype Darryl Thurner developed and his designs became the envy of his co-workers, who benefited from enhanced "working rhythm" on the job. Left side bags were designed with the angle square neatly tucked between the main and outer "fastener" bag; right side bags were designed to hold the most commonly used tools; knife, pencil, lumber crayon, level, pencils, hammer.

In 1981 the business grew out of its facility in Occidental and moved to a larger location in Valley Ford, CA, a small coastal community located 45 miles north of San Francisco, CA. In 1995, Occidental Leather® moved to a historic building in downtown Santa Rosa, CA.

Darryl Thurner put together an "A" team of carpenters, engineers, electricians, and plumbers who renovated the turn of the century building in a miraculous time frame and once again Occidental flourished for another 10 years in this location. 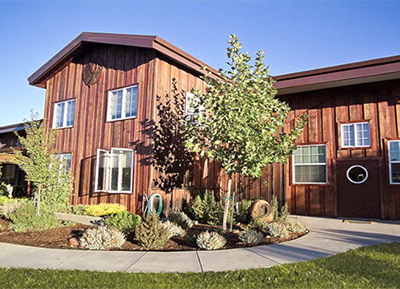 Occidental's tool belts are now a legendary, practical, well designed daily companion to the trades. Their quality and durability make them a smart investment. Parts are delivered to each craftsman, who like highly skilled watchmakers, fabricate each product from start to finish. The consummate quality and precision assembly have made Occidental's products second to none.