The product(s) has been added to {{ listName }}
Shop Lasers

These versatile instruments have many options. When selecting the right rotary laser for your crew, it’s best to know:

These choices are easy when you have the help of your White Cap professional.

Rotary lasers allow you to provide control measurement activity across the room or even entire jobsite with one simple instrument set-up. Rotary lasers contain a module that directs the laser beam around the instrument’s axis a full 360 degrees. The laser beam projection looks like a level line on the vertical surfaces around the work area.

When purchasing a rotary laser for interior work, you’ll normally opt for a unit that emits a bright beam. Some rotary laser level models designed for inside work can be laid over on their side, using an optional trivet to project on a vertical plane.

Rotary laser instruments are typically larger than dot and/or line lasers. You need to securely position these units, so they don’t move, and their axis remains steady.

If you are using a laser level for indoor projects, you’ll want to place the instrument on a relatively flat workspace, such as a countertop. But for outdoor projects with uneven surfaces, it’s best to mount the rotary laser on a surveying tripod.

Another set-up consideration is whether to opt for instruments with a self-leveling or an automatic-leveling feature. The terms "self leveling" and "automatic leveling" may vary by instrument manufacturer.

Most self-leveling lasers require the operator to perform a rough leveling using a bubble vial located on the unit’s base. Once you have zeroed in the bubble, the instrument’s internal pendulum takes over to complete the fine leveling. 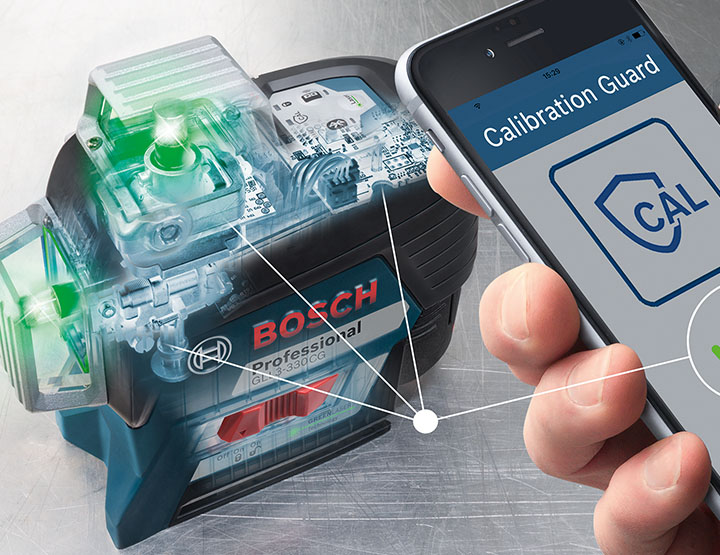 Unfortunately, various conditions on the job site, including failing to lock the pendulum mechanism in place, poor handling of the unit, dropping or falling, poor storage, and general wear and tear can cause a laser to become out of calibration. Many manufacturers recommend that you calibrate your laser at least once a year, while every 6-months is preferred.

If you've confirmed that your laser is giving inaccurate readings, it will need to be calibrated. This can be done manually. Calibrating your laser level yourself does not have to be an overwhelming task. Here are some steps used by professionals to get their laser calibrated and back in action.

Some construction lasers, like Bosch's rotary lasers with uCal, have a self-calibration feature which allows the user to follow a series of simple steps on their smart device to calibrate the laser and get it back on the job ASAP. This helps eliminate guesswork or having to send the unit in for servicing, costing considerable dollars and down time. If your laser has a self-calibration feature, consult the unit's instruction manual.

Laser levels typically emit their projections in two ways. A horizontal beam laser will only emit a single beam from its beacon. Dual-beam lasers emit horizontal or vertical beams to establish both level and plumb reference lines.

You can purchase a rotary laser with either a fixed rotation speed or a variable rotation speed. In both styles, a laser’s rotation speed is expressed in RPMs (rotations per minute) which represents the number of times the laser beam rotates around its axis.

On most rotary laser instruments, there are some trade-offs when opting for rotation speed.  The beam emitted by an instrument with a higher RPM is often dimmer but travels farther. A slower RPM generated beam does not travel as far but is brighter and easier to see.

When doing exterior work, such as grading, setting culverts, or formwork, you probably should opt for an instrument with a fixed rotation speed. The faster, steady rpms produce a beam that resembles a chalk line.

Often, beams from a rotary laser are not visible to the human eye outdoors in bright sunlight. So, you will need to use a laser detector to zero in on the control line established by the instrument.

Laser detectors, also called laser receivers, are often mounted to level rods. You use a laser detector to check elevations and to set control points, especially when working outside. Detectors are equipped with visual and audible indicators that alert the worker on the detectors position with respect to the laser beam.

The visual indicator is usually an LCD screen. But most workers prefer the audible indicator. It provides a noise that beeps faster and faster the closer you get to being on level. When you do get on level, the detector sets off a solid tone.

There are two accessories that enhance a worker’s ability to see the laser beam.

Beam-Finders are special glasses that help you see the beam. Glasses must be matched to the beam’s color. Another method is to place laser targets on the surface onto which the beam is projected so that they can reflect the beam’s location.


Circling in on Productivity

Rotary laser levels have transformed a contractor's ability to efficiently control jobsite layout, check elevations for grade, and align common attachments. When you approach your selection of these instruments as an integrated system, you are maximizing your return on investment. Check with your White Cap professional to make sure your choice is on target.
Discover better prices and location specific benefits
No, thanks!
No, thanks!