The product(s) has been added to {{ listName }}
Shop Geosynthetics

Project owners are under greater constraints when developing or updating building sites. These constraints start with the requirement to comply with strict stormwater controls to protect existing soils. Also, project owners are demanding shorter construction timelines. And when the project is completed, owners want a finished site with long-term stability that won’t require extensive maintenance.

Contractors want to employ building systems that can maximize efficiency while helping to reduce costs. They often face productivity and safety challenges when beginning their site work. These challenges can be caused by poor soil conditions, unexpected concerns about erosion control, and even slope reinforcement.

Implementing geotextiles when updating or developing challenging building sites can improve or resolve many of these concerns for contractors, developers and building owners.

Geotextiles also play a key role in reducing a project’s overall carbon footprint. Geotextiles can allow the contractor to reduce the volume of raw materials required on a project. And on many of these applications, geotextiles can decrease a contractor’s amount of material handling. Since geotextiles help preserve soil conditions, they have also create a positive environmental impact long after the project is completed.

Every project starts with the soil

Contractors can often track their jobs by looking at the color of mud on their pick-ups. Each construction site has different ground conditions.

Since all soils aren’t the same, you can use geotextiles to improve soil characteristics to meet acceptable standards before constructing embankments, roads, pipelines and earth-retaining structures.

Soil engineers refer to these differences in terms of boundary conditions (i.e. confining stress and flow conditions) and hydraulic gradients.

The Versatility of Geotextiles

It’s important to assess the project requirements before you start to identify the problem you want the geotextile to solve. Geotextiles are manufactured to offer several attributes, which include separation, drainage, filtration, structure reinforcement, and erosion control.

After contractors place geotextiles on the top of a weakened or soft soil layer, they add a layer of coarse aggregate. The fabric prevents the coarse aggregate from intermixing with the material under the fabric for the life of the structure. The fabric’s ability to keep the different materials separate is effective even when the area becomes saturated with moisture. With this stratification, the coarse aggregate particles interlock to form a bridge over the lower layer.  Engineers can calculate the necessary thickness of the coarse material to make the roadway stable, even when the area is subjected to repeated applied loading. This application is effective for creating subbases for roads, pavements, and slabs.

You must match the geotextile to the anticipated loading so that the fabric has a mass per unit area and strength that can resist mechanical stresses. Manufactures offer a wide array of geotextiles that combine thickness and permeability properties, to prevent soil contamination and to allow water flow without compromising structural integrity.

Engineers often specify geotextiles to enhance drainage and filtration in subsurface structures. These drainage applications are found along highways, within embankments, under airfields, and concrete slabs. These drainage structures work best when they have a properly designed protective filter. The selection must include an estimation of the volume of water transferring through the fabric and a design that protects the fabric from being plugged.

Contractors can use filtration geotextiles for smaller situations as well. These applications include: edge drains, interceptor ("french" or "burrito") drains, wall drains, recharge basins, and relief wells. In these applications, the geotextile should be designed to survive construction, allow the passage of water at high rates, and retain in-situ soil so particles don’t clog the drain. The best design is to place the geotextile filter around the perimeter of a drainage trench, with the pipe encapsulated in stone. Wrapping a pipe with a geotextile, in general, is a poor practice and should not be done unless the soil adjacent to the geotextile is a clean sand or stone.

For many applications, geotextiles are used to filter water as it drains through the soil layers. These applications are often found on landfills. The geotextile permits the liquid to flow on top,  keeping it from entering the lower layer. This is an effective tool when there is a need for water to move in two directions, leading the liquids to a collection point.

Road and railway stabilization are probably the most common applications for geotextiles. They reinforce the path of transport to provide constructability, reinforcement, and access over very soft soils. Roadways
Contractors place geosynthetics on top of soft sub-grades prior to placement of the granular sub-base layer. They separate the materials preventing intermingling over the life of the road, and reduce maintenance. Railways
Contractors place geosynthetics on top of soft sub-grades prior to placement of the granular sub-base layer. They separate the materials preventing intermingling over the life of the road, and reduce maintenance.

The growing interest in engineered structures has led to the development of new geotextiles. Geogrids and high strength geotextiles allow contractors to construct slopes, walls, and embankments quickly, and cost-effectively. These products have become integral components in mechanically stabilized earth structures such as retaining walls, slopes, and embankments. 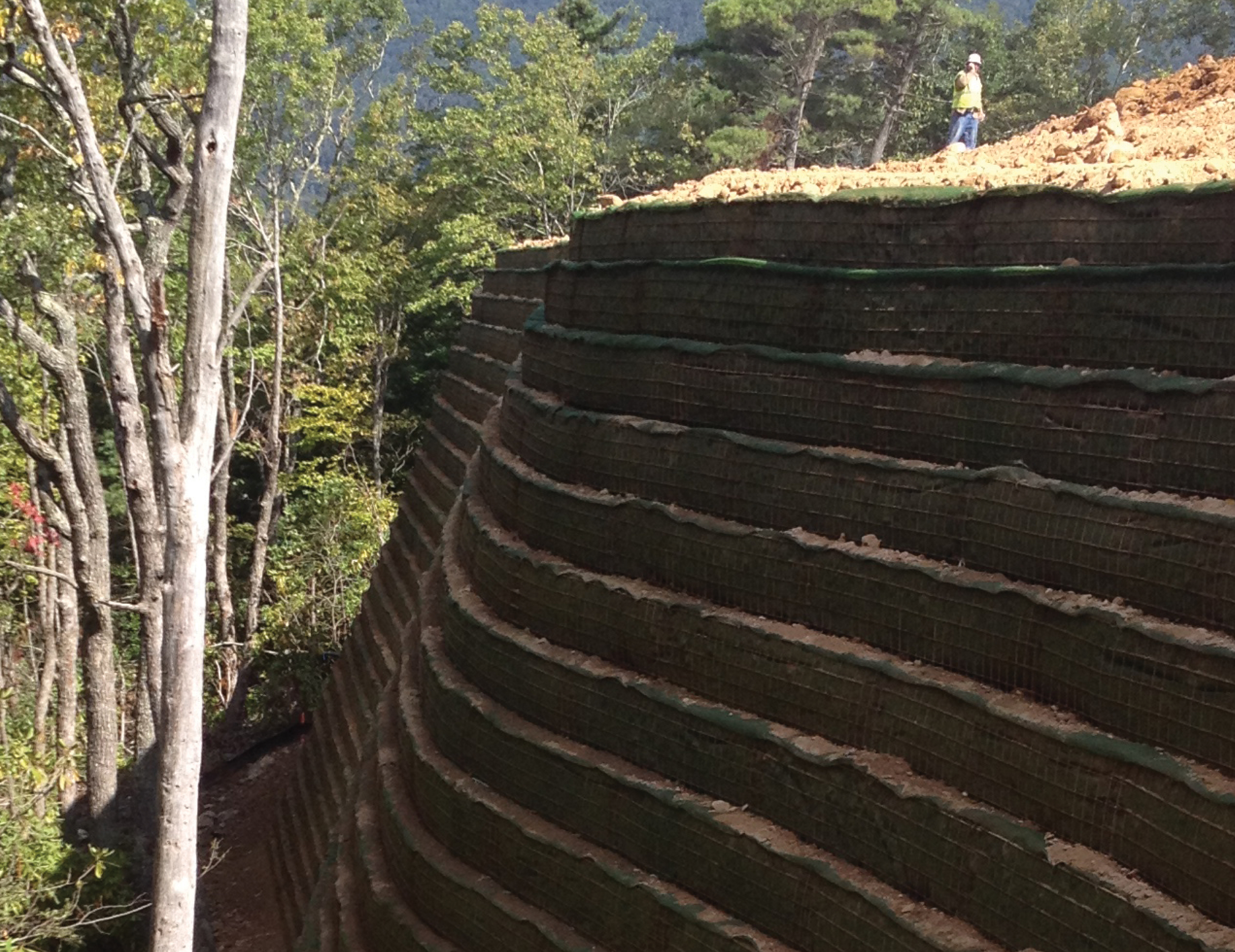 Steepened Slopes
Geotextiles are layered during the slope’s construction to provide tensile resistance and enhance stability. With the right site conditions, this technique enables slopes to be constructed to any height at any slope angle. Another benefit of this application is that it can reduce final grading time and costs by allowing the facing slope to be seeded. 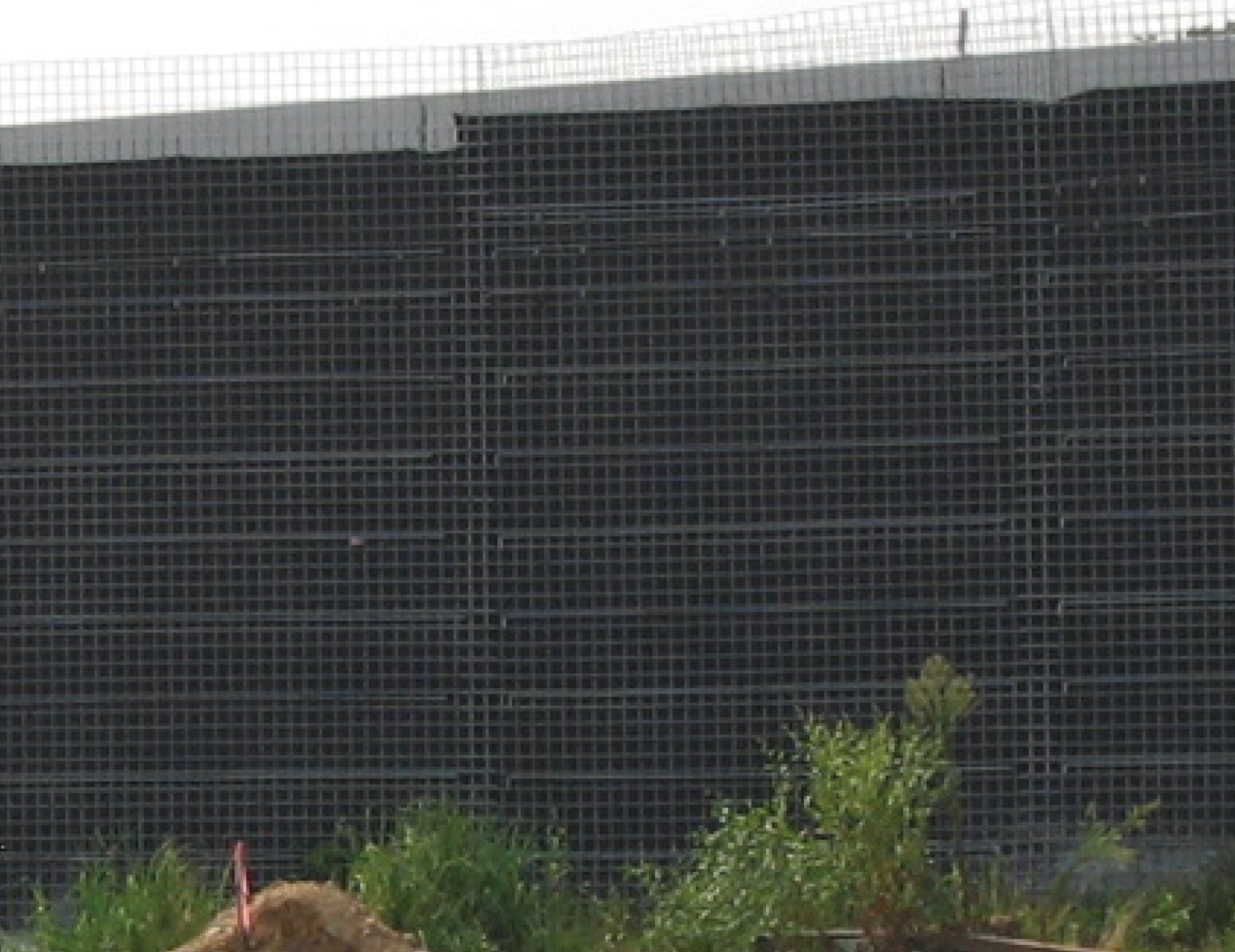 Retaining Walls
Many retaining wall manufactures have incorporated geotextiles in their recommended design and installation guide practices. Geogrids are often used as a facing with segmental concrete blocks. The fabric eliminates creep and often reduces the amount of grade that must be cut out. 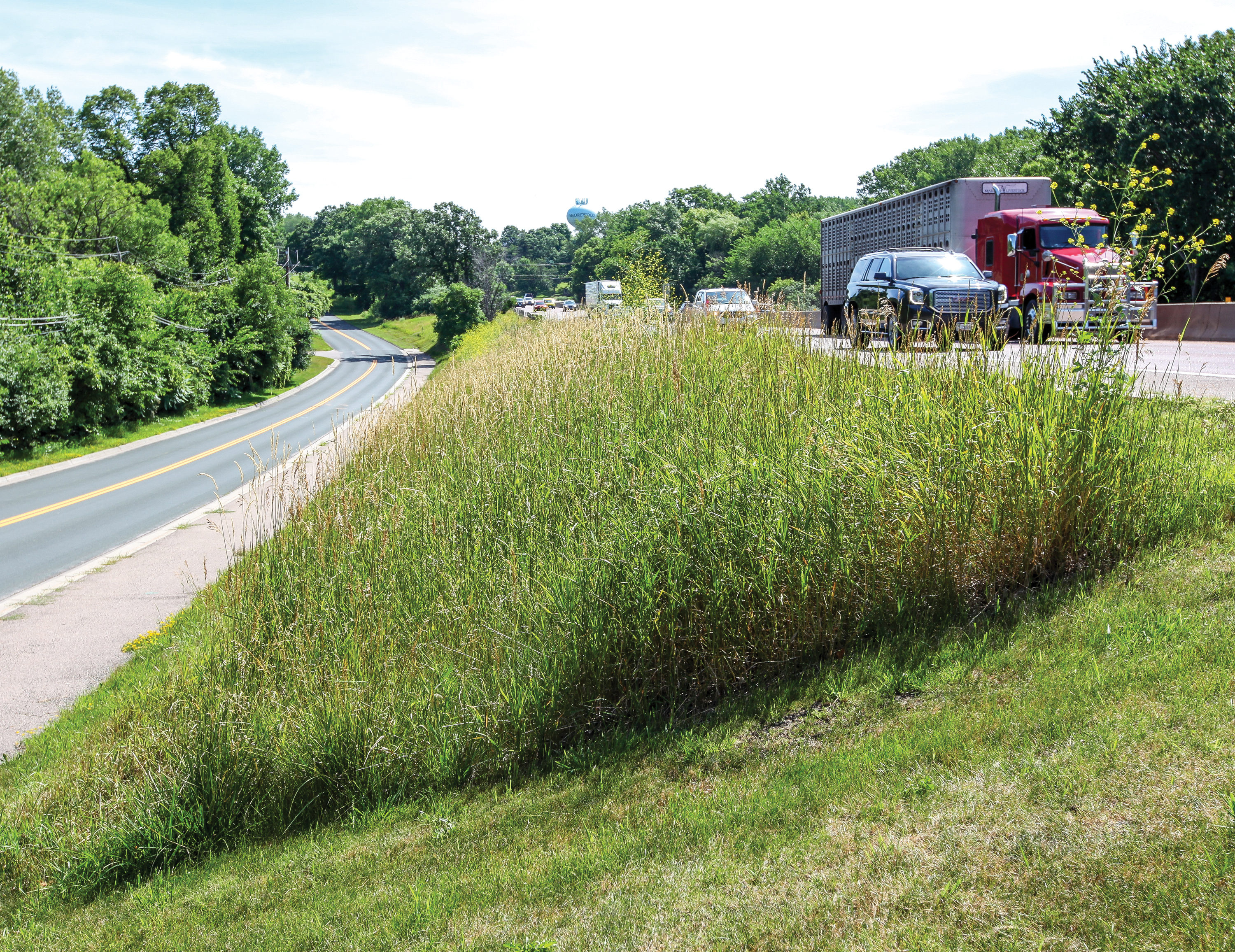 Reinforced Embankments
One challenge when expanding an existing roadway or site is when embankments become steeper or are subject to differential settlement. Geotextiles are used at the embankment’s base, often placed directly on the soft foundation, over foundation piles, or over areas subject to void formation prior to the placement of the embankment fill.

Geotextiles have been used to prevent erosion during and after construction.

Stormwater management and vegetation regrowth
Geotextiles deliver solutions that provide bare soil retention, vegetation nurturing and high-performance turf reinforcement. Geosynthetics assist with the dissipation of flowing water, and the increased roughness coefficient. Combined with greater light penetration, this creates a nurturing environment in which the grass root system can grow. These products are also suitable for both channel lining and slope/overtopping applications.

Permanent Erosion Control
Filtration geotextiles are often used in the following erosion control applications:  wave protection for shoreline embankments and causeways; scour protection of various small drainage structures and ditches; and cut and fill slope protection for structures such as bridge piers and abutments. As with drainage installations, these applications require that the geotextile be designed to survive installation, plus allow the passage of water while retaining in-situ soil without clogging.

One specialized use of geotextiles is in the construction and maintenance of in-ground containment structures such as landfills.

Geotextile products designed for these applications include: